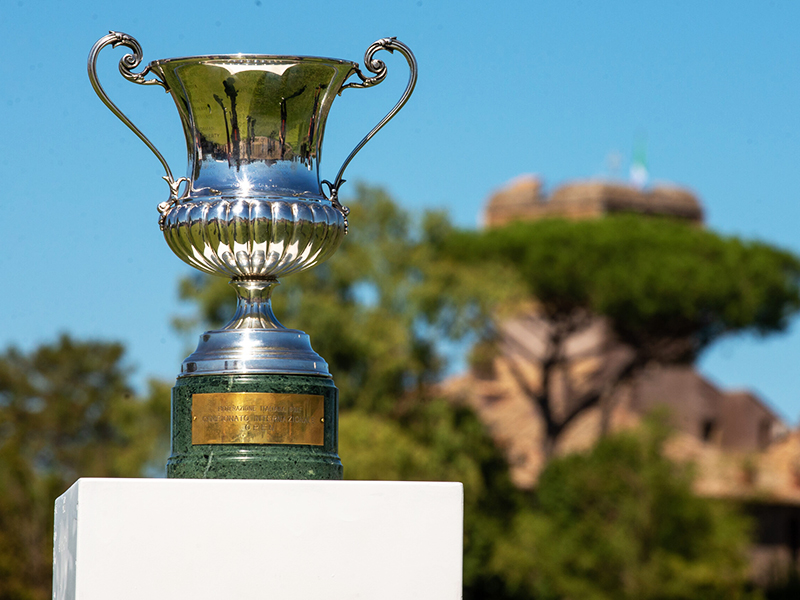 Early appointment next may for the 80th Italian Golf Open. Once again at the ‘Marco Simone’ in Guidonia.

DS Automobiles 80th Italian Open has been officially brought forward by a few months. The reason for this change of schedule is to make way for the prestigious and long-awaited 44th edition of the Ryder Cup – the most popular golfing challenge between the European and US teams – which will be held in Italy for the first time (on the same ground as game of the Open!), from 29 September to 1st October 2023.

The Open will be played for the third consecutive time at the ‘Marco Simone Golf & Country Club‘ in Guidonia Montecelio (Rome). Official partner for 2023 will still be Infront, official advisor of the FIG.

The Italian appointment in May is a stop on the DP World Tour 2023 calendar (former European Tour), the top global circuit in men’s golf. A crucial test to face for our athletes, and not only. 156 players will participate in the tournament and it will be played over a distance of 72 holes, 18 a day. After the first two laps, the cut will leave the first 65 classified in the race and any tied in 65th place. Up for grabs is a jackpot of $3,250,000.00.

The next Open will be a taste of the world’s most watched golfing event, the Ryder Cup. Many fans are waiting to find out the names of the champions who will compete (there will almost certainly also be several participants from future Ryder Cup teams).

The revamped DP World Tour 2023 schedule features a minimum of 39 tournaments in 26 countries, a total prize pool of $144.2 billion for the season’s base tournaments, and bonuses for the top eight players in the DP World Tour Rankings. It will proceed from South Africa to Australia, from the United Arab Emirates to Kenya, also passing through the United States and Japan, until it reaches almost all of Europe, including Italy. A full-blown world tour.

As Franco Chimenti – FIG President – said: «The DP World Tour marks a sensational turning point for European golf, expanding its boundaries to enter a global dimension. The exponential growth of the racing circuit – also economically – confirms the absolute importance of this sport. Looking forward to the Ryder Cup in Italy, I am sure that the great champions who will compete in the DP World Tour tournaments all over the world will excite more and more people».

The largest prize pool ($9 million) will be the five Rolex Series tournaments (against four in 2021): the Abu Dhabi HSBC Championship (January 19-22), the Dubai Desert Classic (January 26-29), the Genesis Scottish Open (July 13-16), the BMW PGA Championship (September 14-17). The final competition – the last match of the series – will be held in autumn in Dubai: the DP World Tour Championship (November 16-19) will secure 10 million dollars at the end of a season that promises to be a record.

For the first time in the golf history, Italy will host both the Open and the Ryder Cup. A colossal double show for which expectations are very high. An epoch-making event that will make Rome the undisputed star of the international golf calendar for the 2022-2023 season.

TriviHo, the perfect hotel to meet the greatest golfers at the 80th Italian Open

DS Automobiles 80th Italian Open is one of the most popular events on the world golf calendar. The next edition will be held, with an extraordinary advance, from 4 to 7 May 2023. Over four days of strong emotions you can witness the exploits of the most famous athletes on the international scene.

Are you thinking of booking a hotel in Rome while waiting to secure your tickets for the Open? Then TriviHo – Luxury Hotel Rome is the right hotel for you!
Located in Rome city center, TriviHo means comfort, elegance and design. Our hotel is located in the central and historic via Barberini, near the Trevi Fountain, Trinità dei Monti, the Spanish Steps, via Condotti and Villa Borghese.

Book your luxury room now: TriviHo is the ideal boutique hotel to combine the pleasure of sport with wellness and relaxation!

Don’t lose your front-row seat at the ‘Marco Simone’ to watch the performances of world golf champions!

Also this year the official headquarters of the DS Automobiles 80th Italian Open will be the ‘Marco Simone Golf & Country Club’, in via di Marco Simone, 84/88, 00012 Guidonia Montecelio (Rome).

The sports club is about 20km from TriviHo – Luxury Hotel Rome. It can be reached by car/taxi (in about 30 minutes) or with a regional train (direction Palombara Sabina) departing from Tiburtina Station (in about an hour).

All useful information on tickets and how to access the 80th edition of the Italian Open will be published soon on the websites openditaliagolf.eu and golfmarcosimone.com.